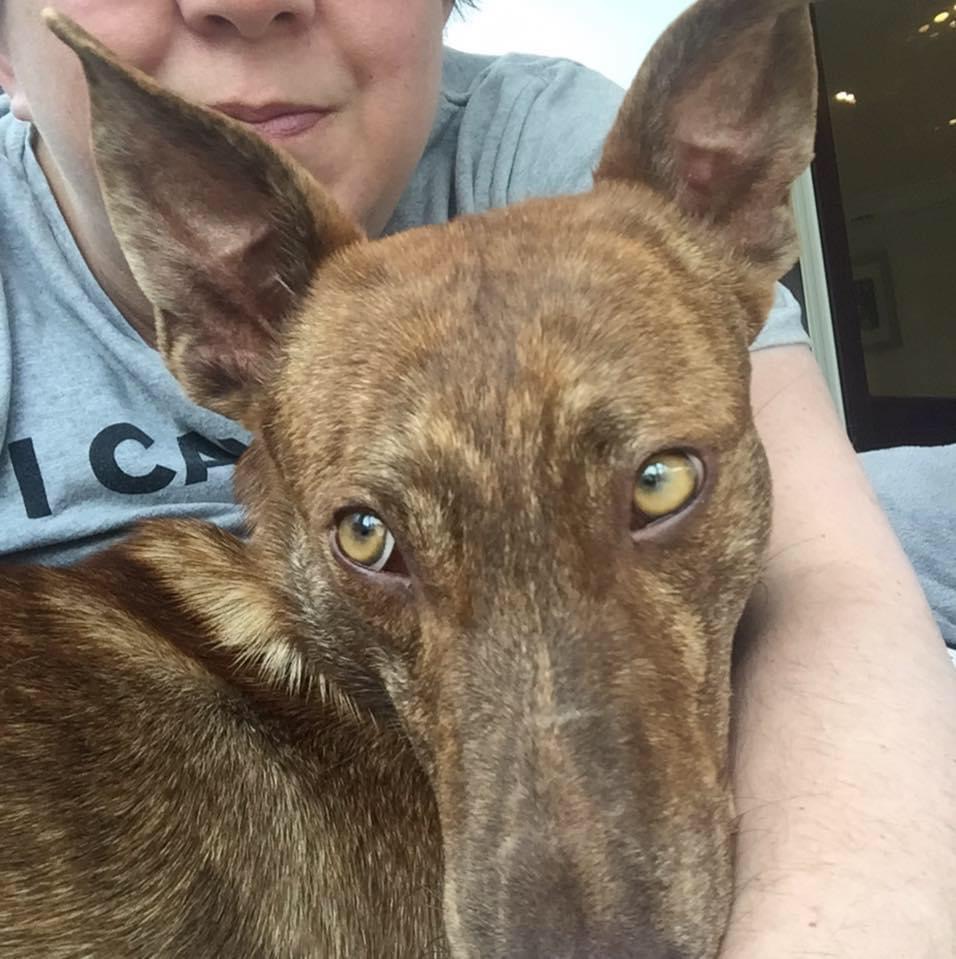 Hunter was born on the streets of the Canary Islands.  He and his siblings were picked up by the local dog warden when he was about 6 months old and taken straight to a Kill Centre where he was on the list to be put down with hundreds of other dogs.  Because of his fate, he was kept in very small, dark kennels with many other dogs and hardly fed or cared for during that time.  He was then rescued by a local woman but unfortunately, he still didn’t get the care he needed and was eventually picked up by AA Dog Rescue in Essex﻿ and transported to England for rehoming.

We first met Hunter when we visited the kennels 4 years ago.  He was with a number of other dogs but fought his way to the front to jump up and lick my hand.  I knew straight away he was our dog, and we were his humans. We took him for a little walk and before we came back, we were talking as a family about how long it would be to bring him home with us.

Two very long weeks later after home checks and paperwork he arrived with us.  We already had 2 non rescue dogs so our biggest worry was him settling in with them.  He has never been a problem at all and is everyone’s favourite buddy, including the cat!

At first Hunter was so scared of everything!  He wouldn’t go upstairs as he had never seen stairs or carpet and had to be carried up and down.  He slept his first night in our bed and seemed like he hadn’t slept for a long time.  Our biggest challenge then and still now is he is terrified of everything and everyone.  Even now if one of us picks up a broom he will run and hide.  His nightmares used to be so intense, and he would wake up shaking but thankfully these seem to be few and far between now.  He was by no means a saint at the beginning.  He got through 2 Sky remotes, an Xbox controller and a door stop in the first few weeks! It was almost like he needed to be a puppy as he hadn’t had the chance before! He still has separation anxiety sometimes and will scream if we take one of the other dogs out the house.  I think it’s because he is used to dogs going and not coming back but it may just be a fear of missing out on his part!

Our funniest moment with Hunter was when we received his passport and next to breed it said “desconocida“.  We spent hours trying to find this breed on google only to be told by google translate that “ desconocida “means “unknown” in Spanish!! Helpful!  Once we did some digging with the rescue we were told that he was a Podenco cross.  A Spanish hunting dog treated as disposable in many parts of Europe and used by hunters to catch rabbits mostly.  We were told Podencos could be stubborn (which he is) and a flight risk (which he is) but what we didn’t know was just how funny, playful and totally loving they could be.  For Hunter’s first year with us I wrote a blog on his journey and how well he did, and it was amazing to see his progress.  From a dog that would only sleep next to his warm fluffy bed on the hard floor to a pampered pooch who demanded the best place on the sofa and barked at us at 5pm on the dot for his dinner!  He has interesting tastes in food and drink which probably comes from walking the streets to find something to eat.  He is very partial to a cappuccino or a glass of red wine if you leave it in his reach, so we have to watch him carefully!

Hunter’s routine now is to yodel at 6.30am to get our attention and then he likes to follow you down the stairs holding your hand with his mouth (not biting, just holding!).  He is our wonderful Pod boy and made us fall in love with the breed so much……2 years later we adopted another one, called Moose!

My beautiful boy has been through so much in his early life but is still so quick to love and full of life.  He is definitely our little hero, and we wouldn’t be without him.